Tea of the United States

Tea of the United States

In 2013, the first meeting of the US League of Tea Growers took place at the World Tea Expo in Las Vegas. Growers from Hawaii, Mississippi, California, and other states joined together to discuss processing, share their knowledge of tea husbandry, and recognize each other’s work. It was a great first step for a young tea origin, and in the last few years, World Tea’s classes, seminars, and gatherings have reflected a growing desire to acknowledge the US as a tea origin. But for consumers, the questions remain: “Where do we purchase US-Grown tea?” And, almost more importantly, “What should we expect from it?” This country’s tea doesn’t have much of a reputation, yet. Its main touting point is that it’s local.


For the first time, US-grown tea will be rated with the discernment applied to the rest of the world’s teas, but in a category all its own.

November’s Tea of the United States Awards (TOTUS), to be held in Volcano, Hawaii, hopes to change that. The first competition of its kind, it will judge teas from Hawaii and a number of mainland states, grown both commercially and non-commercially, in four categories: white, green, oolong, and black. For the first time, US-grown tea will be rated with the discernment applied to the rest of the world’s teas, but in a category all its own. The results will set a bar for consumers and growers, and ideally pave a path for a thriving local tea industry with respected origin status.
America has a lot to bring to tea, not least of which is an array of unique microclimates. In countries like Japan and China, cultivation practices and techniques have been honed over centuries, but because tea is young in the US, today’s farmers (mostly first generation growers) are writing the manuals in their particular regions. As they sow the seeds for future agriculture success, those growers also seek recognition and governmental funding. Both are goals of the TOTUS awards, and the TOTUS website. 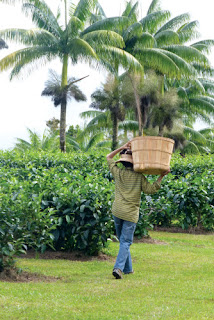 “We hope that the website will be a resource for people to help identify these teas, and so people can stay connected to these tea-growing regions,” says Eva Lee, a tea grower in Hawaii and TOTUS’ executive director. While the winners will take home money—the top three teas submitted by commercial growers in each category will receive cash prizes—bolstering American tea’s image as a viable commercial crop could be even more valuable, encouraging the federal government and local governments to support tea agriculture the way they have in Hawaii, where federal, state, and county governments have pushed tea as a new specialty crop. TOTUS’ non-commercial winners (with yields of less than five pounds per year) will receive certificates and name recognition, a potentially valuable push towards stepping into the
commercial realm.

The struggle for origin recognition is nothing new—look at coffee packaging, or tea from other countries—but its importance in getting consumer attention shouldn’t be undervalued. Though the judging could get complicated with so many appellations in the US, Lee says TOTUS (and its impressive panel of jurors) is well up to the task, and excited about the impact the awards could have on the future of US tea.
“It’s a new crop for this country and like any new crop, it takes time,” she says. “More and more, the US tea farmer understands that it is more than just farming tea, that they have to step up and communicate directly with the consumer. Demand keeps increasing; the more people that grow tea the better.”